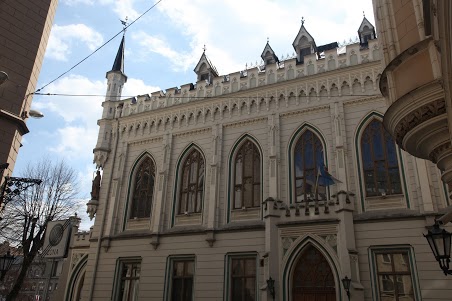 Craftsmen did not have such an importance influence on city’s activities as merchants did, therefore even their Guild was called the Small, just opposite to Merchants’ Guild. The Small Guild was established in 1352, the number of corporations increased till 40 in the XVIIIth century.
The building of Small Guild was built in the XIVth century, big reconstructions took place in 1694 and 1743-1744. The present building of Small Guild was built in 1864-1866 by J.D.Felsko who completely destroyed the former building. Now a culture house “Guild” is situated there.
PANORAMA OF SMALL GUILD HALL