Scandinavian flags from the Baltics? 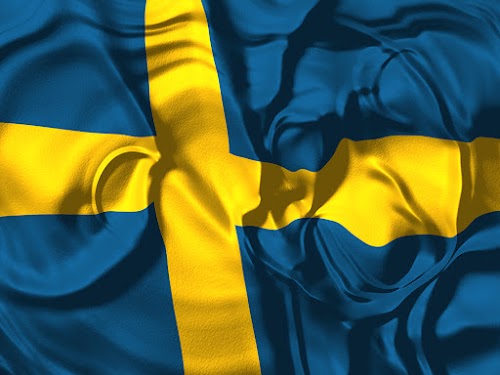 Every Dane knows that the flag of Denmark was sent by the God to the Danish vikings in the Battle of Volmer at Reval (Tallinn,Estonia) in 1219, during Valdemar Sejr’s crusade to Estonia, and it is said that Danes carried their coat of arms, the white cross on a red background, during this crusade.

But did you know that the flag of the Danish neighbours – Swedes comes from Riga? Â Well, it is not a joke.
A well-known Scandinavian history expert Carl-Gustav Liljenberg has put forward a theory that Erik XIV of Sweden adopted the blue and yellow cross coat of arms of the city of Riga in 1562, in order to incorporate Riga’s important trade system with the Swedish.
The Archdiocese of Riga’s yellow coat of arms on a red background derives its origin from Albert de Buxhoevden (Bishop of Riga from 1199-1229), who founded both the diocese in 1201 and the Order of the Sword in 1202.
Pope Innocent II recognised both the Order and its coat of arms, a yellow cross on a red background, in 1202. This Albert cooperated with the Archbishop of Lund, Andreas Sunesen (1201-1228), who undertook the crusade to Estonia in 1206. Later, Albert asked Valdemar II/Sejr for his assistance in continuing the Christianisation of Estonia, and the result was the battle at Lindanisa, later Reval, now Tallinn on June 15, 1219.
The Christianisation of Estonia was thereby almost complete. Estonia came under the jurisdiction of the Archdiocese of Lund (1219-1346). Andreas Sunesen, who accompanied Valdemar Sejr in 1219, remained in Estonia until 1221.
Through the central role played by Albert de Buxhoevden, this red and yellow flag became the coat of arms of the Diocese of Riga, and Andreas Sunesen adopted this coat of arms as his own and that of the Archdiocese of Lund.
Thus, there is some evidence that the flag of Sweden has its origin in the Diocese of Riga and that Andreas Sunesen was the first bearer of this cross coat of arms.